For the first time, astronomers have detected the shockwave of a giant star as it becomes a Type-II-P supernova. The observation was made using the Kepler Space Telescope, and has been reported along with a description of an even larger supernova.

When stars exceeding eight times the Sun’s mass reach the end of their lives, their cores collapse, triggering a giant explosion. Where a substantial hydrogen envelope survives around the star, these become Type-II-P supernovae.

For decades, astronomers have been frustrated by a lack of opportunity to study the earliest stages of supernovae, since we don’t notice them until they are already bright, but the Kepler Space Telescope has partially filled that gap. The discovery of a shockwave in KSN2011a is an early scientific reward.

Kepler was designed to find planets around other stars in our galaxy, at which it has been spectacularly successful. However, it has also offered other opportunities. Dr. Brad Tucker of the Australian National University told IFLScience that “Kepler [operators] choose which pixels it downloads. We put in a request for the pixels of 500 galaxies so we could look for supernovae.” The galaxies are all in the background of stars Kepler was going to check every 30 minutes anyway, minimizing cost.

The project hit paydirt, finding six supernovae, including two Type-II-Ps. These eventually became bright enough to outshine their host galaxies and, by tracing backwards through Kepler’s images, provided the opportunity to witness their rise to brightness.

Tucker is co-author of the paper in the Astrophysical Journal (pre-print at arXiv.org) that describes the observations of the explosions dubbed KSN2011a and KSN2011d. These occurred 700 million and 1.2 billion light-years from Earth respectively,far too distant to directly study the stars responsible before they blew up.

However, Tucker told IFLScience that research on previous supernovae has demonstrated a relationship between progenitor star size and the speed at which a supernova brightens, as well as its peak luminosity. Using this information, the stars have been estimated as having radii 270 and 460 times that of the Sun. Tucker said mass estimates are less precise, but both were probably 10 to 15 solar masses.

Possibly the most significant aspect of the study is the detection of a shockwave in the smaller explosion, KSN2011a. As Tucker explained: “We have a mathematical model of how the light curve should be without a shockwave, and for KSN2011a we see the curve deviating from what is anticipated. If we subtract the two, we can see an extra signature that is very like a shockwave. It lasted for 20 minutes to a few hours, but with time dilation that appears longer.”

In the case of KSN2011d, “The star was so large that the shockwave did not travel all the way to the surface,” preventing us from observing it, Tucker said in a statement.

The observations will help astronomers understand supernovae. Tucker told IFLScience that Kepler’s replacement is keeping an eye on an even larger number of galaxies, and that several supernovae have been observed, but that “it takes a long time to analyze the results.” 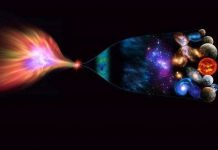 The Black Hole That Gave Birth to the Universe

The Black Hole That Gave Birth to the Universe